The world has enough “successful” people, but too few who know how to love.  Imagine the difference we’d make if we chose to fully love all of those within our sphere of influence.  Such love would be a greater contribution to our world than any of the greatest missions in history. #thegiftoflove 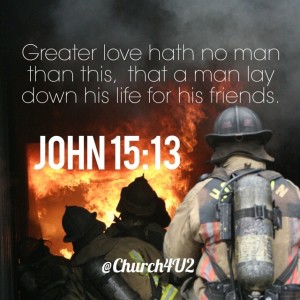 I’m struck silent as I consider statistics on child poverty, abuse, and injustice. 143 million orphans. 1 billion children worldwide living in poverty. Over 3 million children abused each year. 150 million children engaged in child labor. 400,000 children trafficked across the borders each year. Reading these facts, I lament: these children need a hero. Actually, they need heroes to rise up and become a voice in our world of injustice.

In light of the grave suffering our world’s children endure, it’s a farce that our culture would attempt to re-define heroism according to a person’s investment in their own sensual fulfillment. Really? Would we call a hero one who would spend millions in pursuit of self-gratification? Is courage now dependent on one’s commitment to self-indulgent personal happiness? Is bravery now equated to one’s ability to acquire millions for squandering on selfish fantasies?

There was a time when a hero was one who sacrificed all for the good of others. Courage came in the form of laying down one’s life for a friend. Bravery meant facing death that others could live.

Our flimsy re-definition of heroism is but a symptom of deep-rooted issues. We’ve suppressed the truth of who we are and whose we are. We’ve forgotten why we’re here. If each would live according to our greater purpose and higher calling, how much of today’s suffering would dissipate? And how quickly.

Instead, we live ignorant and bored, ever in search of the latest diversion, however costly. And we read the headlines, shake our heads at the devastation and praise the man-made-woman all the while pointing our fingers at God in blame for the suffering.

If there is suffering, it’s not because God is silent and inactive. It’s because we are. And we’ve traded the greater good for the empty cistern of selfish gain. 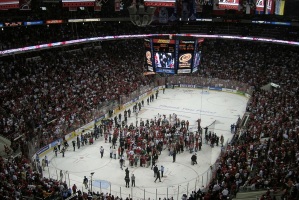 Die-hard fans braved threatening weather to witness the Blackhawks face-off for another championship. Even those who care nothing for hockey were converted to temporary fandom in time for the finals. Following the victory, multitudes swarmed the streets of Chicago for one glimpse of the winning team with their coveted cup. And I could only think of one thing.

There are young girls, even boys, being trafficked in celebration of one short-lived victory.

Ever since I found out that sporting events are among the largest magnets for human trafficking rings, I can’t glimpse a fragment of a game without mourning the countless victims waiting in the wings for the after-game festivities. How can we revel in the fantasy of athletic glory when so many are living a nightmare as a result? How can we root for any team if no one is rising to fight for the slaves suffering among us?

It’s beyond tragedy that we keep silent as an estimated 9.5 billion per year flows from our country into the torture of young innocents. As our sports heroes bathe in fame, fortune, and glory, our children are led as sheep to the slaughter. We invest millions in sports mania, blind to the billions squandered on the trafficking of our future. Will we continue to stand on the sidelines, watching in silence?

When we write merely to validate our existence, or to gain approval from others, we lose our sense of purpose. A compass set to others’ opinions is bound to take us off course. The judgments of man are constantly changing. What’s trending one day is forgotten the next. I don’t want to write to be popular or well-liked, I want to write from the heart…words that will stand the test of time and eternity.