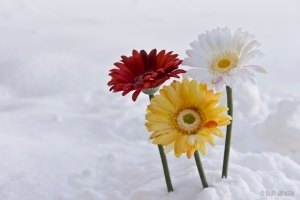 If you live in the Midwest, it’s not a good idea to pack away your thermals for the summer or to box up your t-shirts for the winter. Weather-wise, you never know what you’ll get out here. You could be wearing flip-flops in February and long johns in July. It wasn’t long ago that Snowmageddon hit and we were snowed in for a good chunk of winter. This year, it seems everyone’s been outside jogging in their shorts since the end of January.

In my perfect world, winter would last from Thanksgiving to a few days after New Years. We’d have five months of spring, a few weeks of summer, and five months of fall. It’s not that I don’t like winter or summer, just not the extreme temperatures that come with them.

Unfortunately, we don’t live in my perfect world. Winter typically comes a little too early and stays way too late. Summer gets impatient and takes over before spring has a chance to say goodbye. And fall’s colors never stick around long enough. But, like I said, there are always surprises.

This has been a winter of surprises, with a relatively mild January, and February racking in a record number of above average temperatures. Still, we all know it’s not over yet. Though in a few short weeks the calendar will tell us it’s officially spring, we can’t get too confident. Winter might decide it’s hungry for a few flowers.

Despite the inconsistencies of Midwestern weather systems, I refuse to complain. Spring has fought a good fight already, breaking through into winter…giving glimpses of things to come.

Life has it’s own seasons. Too often we linger in frigid cold. Yet in the midst, God intervenes, bringing glimpses of spring as a reminder that winter will come to an end. Spring is like hope. It’s heaven breaking through, reminding us that there is a glory that far outweighs our light and momentary trials here on this earth.