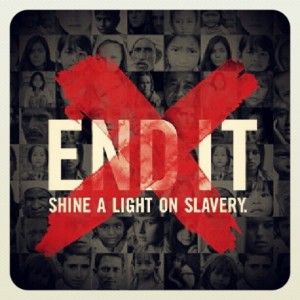 I first heard about human trafficking when I was in college. An article I read detailed the horrors of children in Asia, harbored as slaves, kept in the same cages we use to transport our pets. The thought that something so appalling could happen in our world kept me awake at night, stole my appetite. Rendered me powerless.

But for me, it was just that. A thought. An article I read. Nothing compared to the reality that is slavery for 20 to 30 million people every day.

The fact that we even have a number for it staggers me. How can we have a statistic for the insurmountable injustice and not have done anything about the people behind those numbers? How do we even acquire these statistics? Go to the slave yards and houses, get the numbers, and leave the victims to suffer?

And what can average me do about it? Cry? Feel a tinge of regret that it’s happening then go on with my comfortable life?

Since reading that article, I’ve been overseas. Encountered street children in the Philippines. Spoken with victims of sex trafficking in the red light district of Holland. Seen children lined up “for sale” in Tijuana. And I’ve been here, in our own “back yard.” Driving home at midnight, stopping because there’s a girl on the corner who looks like she could be my niece. And she doesn’t want help because she fears for her life at the hands of her traffickers.

It happens here, you know. In the city and the suburbs.

And it makes me sick. Drives me to depression sometimes just thinking that slavery has never really been abolished, like they say. But that’s not enough! Feeling sick and depressed about something so awful is not gonna do anything.

So I told my sister I want to raise awareness, want to do something. I’m writing a book, starting a blog. But what can my one, little, average voice do? Especially when there’s so many voices out there, clamoring for attention. And my sister reminded me…we need all the voices we can get. No matter how small, no matter how average—every voice that rises in outcry against the injustice of modern slavery is one more voice in the battle for freedom.