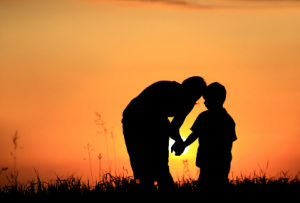 I never imagined there’d be so many work-related hazards involved in motherhood. It’s for good reason I sit with caution when playing with my son on the floor. He doesn’t realize how strong he is. I’m usually not prepared for his impromptu body-slams and NFL-worthy tackle-hugs, not to mention all the times he’s nailed me smack between the eyes with a whiffle ball or some other unidentified flying plastic object.

Sometimes, I think it would be easier just to keep my distance. Sitting in the corner on a tall kitchen stool would be safer. Locking myself behind a child safety gate might offer some protection. Or maybe I should just invest in some football gear. A good helmet and some thick padding might lessen the potential for severe injury.

As much as I might want to shelter myself from my son’s innocent though dangerous playtime antics, I’m learning how important it is to play on his level. Sitting eye to eye with him is one small way of expressing my love. It requires humbling myself—even at the risk of getting hurt. Most often, when I engage him in this way, I’m rewarded with at least one of those tackle-hugs and a few ugga-muggas.

As I sit on the floor, eye-level with my son, I think of how God humbled himself for us. He didn’t spin the world in to motion only to leave us as orphans. He came and lived among us, dwelling among the outcasts of society—loving those the world had rejected and touching those others refused to touch. He understands our sufferings because he suffered as we do, and more—humbling himself to the point of death. And all so he could be eye-level with us…all so he could show us what true love is.

“And being found in appearance as a man, he humbled himself by becoming obedient to death– even death on a cross!” (Philippians 2:8)