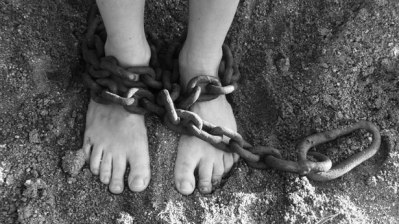 A life in chains is unimaginable from the vantage point of freedom. Nothing could be more horrific than to be taken by force from the life, land, and family you love. Even more inconceivable is that anyone would willingly choose a life in chains.

When faced with opposition to their desired mission among the enslaved of their time, Johann Leonard Dober and David Nitschmann asserted their willingness to become slaves themselves. If reaching slaves meant a life in chains, they would choose such a life. Their declaration? “We shall become slaves among the slaves.” The men were eventually granted passage as free men, yet still they chose to live humbly in a land of slavery to proclaim the gospel of freedom to those in bondage.

As I consider their selflessness, I have to ask myself if I’d willingly do the same. Does my love for others run deep enough that I would sacrifice my comfort and security for their freedom? These men got on a boat and traveled far to fulfill their calling. But we don’t need to get on a boat to find people in need of help, hope, love, and freedom. And we don’t have to travel far to be selfless.

As Mother Teresa once said, “We think sometimes that poverty is only being hungry, naked and homeless. The poverty of being unwanted, unloved and uncared for is the greatest poverty. We must start in our own homes to remedy this kind of poverty.” There are people among us who live in chains. Modern slavery is rampant in our own country. The enslaved reside in our own cities. Still, beyond that, there are people who live as slaves to fear, abuse, addiction, neglect, and more. How can we sacrifice, here and now, for the enslaved in our midst?

While the sacrifice of the Moravian missionaries was heroic beyond measure, we can follow their example of selflessness to free those in bondage right here, right now. We don’t have to wear literal chains to be enslaved to a cause. Our daily, selfless sacrifice can do more for the cause of freedom than we can ever imagine.

“The Spirit of the Lord is upon me, for he has anointed me to bring Good News to the poor. He has sent me to proclaim that captives will be released, that the blind will see, that the oppressed will be set free, and that the time of the Lord’s favor has come.” (Luke 4:18-19)